The keyboard > the sword

GQ Comments Off on The keyboard > the sword 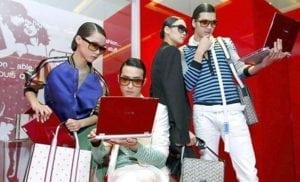 It used to be that if you wanted your views about menswear to be taken seriously, you had to either spend 20 years fighting your way up through the ranks of a magazine’s hierarchy until you got your own column. Or, failing that, find someone to lend you £5m to start your own magazine.

Even if you did get your own column, you would generally be restricted to saying what your editor deemed appropriate. In addition to that, you would think yourself lucky to have 500 words in which to do justice to your masterpiece of modern cultural thinking and you would only have this opportunity once a month.

Finally, just as you’ve come to terms with these outrageous restrictions, you would then have such long lead times that you would often miss key “happenings” in your world because, by the time you mentioned them, they would be old news.

Then, along came blogging and everything changed in the swish of a Prada espadrille.

Suddenly, there was no career ladder to scale and no overbearing editor.

The result is total anarchy, which is wonderful. The whole system has become completely democratic. Literally anyone who has a £250 Argos computer can start their own blog, and can publish to the world anything and everything from their views on the merits of the double-breasted suit to the size to what they had for breakfast that morning.

That wasn’t a typo. The point is that the pesky editor at the magazine was doing a very important job: he was editing. Yes, editing. It’s an old concept which involves you making value judgements about what is worthy of presenting to your readers and what isn’t. [We prefer to think of ourselves as “curators” – Ed.]

So with the plethora of bloggers that now operate across our networks, we have become the editors ourselves. It’s now the reader who has to decide how to value first of all the blogger, and secondly of the information he is presenting to us. We can’t rely on the fact that he must be good because he has worked his way up through the ranks of a famous magazine.