GQ Comments Off on Eating turkey in swim shorts 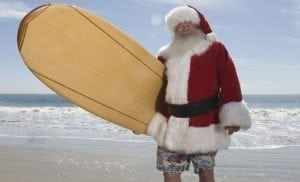 In the old days, it was all very different. We used to buy clothes depending on what the weather was doing. If it was hot and sunny – we used to call it “summer” – we would buy T-Shirts, shorts and sandals. If it was cold – “winter” in the old parlance – we would buy sweaters, jeans and coats with heavy shoes or boots.

Of course, all that has changed: you can now buy shorts in December but not in August and to get a new coat you have to pound the pavements in June because come January, when you really need one, there will only be the hideous what-were-you-thinking ones left at the tail end of the sale. Even then they will only be available in sizes that fit a midget or a giant.

Every season now we are asked to deliver our summer goods to the shops in December and winter in June. Why this works, I have no idea. I just can’t understand why someone would walk into a shop on a hot July day and buy a pair of chunky fur-lined boots. But I’m told that if we don’t get them in store then we will have a terrible season because we’ll miss the early rush.

My question is this: is it you, the consumer, who wants everything in store at the wrong time of year? Or is it the retailers who want to have everything early so as to be seen to be ahead of the game? I suspect it’s the latter, and I also suspect that it is partly driven by the need for retailers to make sure they have sold everything before the season changes, otherwise they will be stuck with it.

Of course, it’s not just the start of the season that has changed – the sales have too. They’re getting earlier and earlier, resulting in the actual weather for that season coinciding with the sale. For example, it warms up in June, just as the sales start, which means that most people buy their summer stuff in the sales. Which in turn means that the sales get bigger and more important, and so the retailer bring them earlier to make sure they get the full impact. And so it goes on.

I’m pretty sure that by 2020 seasons will be totally back to front, with winter gear available in summer and vice versa. The good news is that I think we’ll be back on track by 2030 or thereabouts, and the season will once again be aligned.

There’s no point in me, or anyone else, trying to change all of this because it’s a huge oil tanker that can’t easily be turned around. But I guess somewhere there is an opportunity for someone to start a menswear concept where you can buy summer stuff in summer and winter stuff in winter.  Sounds mad, I know, but radical concepts can sometimes work.

In the meantime, I’d better put down my sun tan lotion and make sure our triple-soled military boots are selling, otherwise it could be a very tough season.